Two days ago I started building a project on the side (I'm currently working as a full-time software developer, but still have my spare weekends and nights, which I plan to use in a productive way). I call the thing I'm building Meetolog.

It's a platform for outlining meeting agendas, keeping meeting notes and tasks/next steps.

Now, sharing the process of building things is not something that I originally came up with. It's a thing that's trending in various communities they call it "building in public" or "building in the open". I first saw it in indiehackers. You basically share the progress, ideas, struggles etc. of something that's currently a work in progress. People do it in many different ways. Some use twitter, others use facebook/instagram, others create youtube videos or write blog posts about it (like I intend to do) etc.

To be honest, I find it a useless exercise, if you don't have a clear goal, a reason for doing it.

So, I have two reasons to "build in public":

This post is my first attempt at building in public.

What am I building?

I've always been a guy who has to to something creative. I cannot simply sit and watch movies all day and dream about the bright future. I need to take action. I need to build stuff.
So, some days ago I had a meeting with my colleagues, where someone raised the topic of meeting artifacts. We agreed that as a team we kind of suck at it. Our meetings are rarely well structured and we almost always have blurry outputs - lack of clear next steps, no central place for meeting logs, notes, decisions taken etc. As I dig deeper into my memory, It's something that I have always witnessed (even at my previous work places), but never addressed as a problem.
After 20 minutes of thinking and scribbling down some ideas, I've had the problem outlined and an MVP in mind.
So, I'm going to build a web app, which helps teams structure their meetings input/output before, during and after the meeting. I'm aiming for as little functionality as possible for the initial version (the MVP). That means the usual user authentication (which I plan to build myself, without third party vendors), a dashboard with all the meetings and a meeting screen, where one can create the meeting structure beforehand, outline the agenda, setup some key meeting objectives and invite colleagues via email. The meeting screen should be interactive in real time, for which there's no other way than using sockets, but that's an implementation detail I'll deal with later. I missed to mention the payment processing, which is going to be handled with Stripe, most probably.
My approach to building this is to build the MVP as soon as possible, create a landing page and setup free and payed plans (still not sure about the payed plan, maybe it's a better idea to start completely free...it's a TBD in my list of todos for now).

The same day I had the idea, I started working on it.
Here's the rough prototype of the dashboard, directly screen-shotted from the browser. 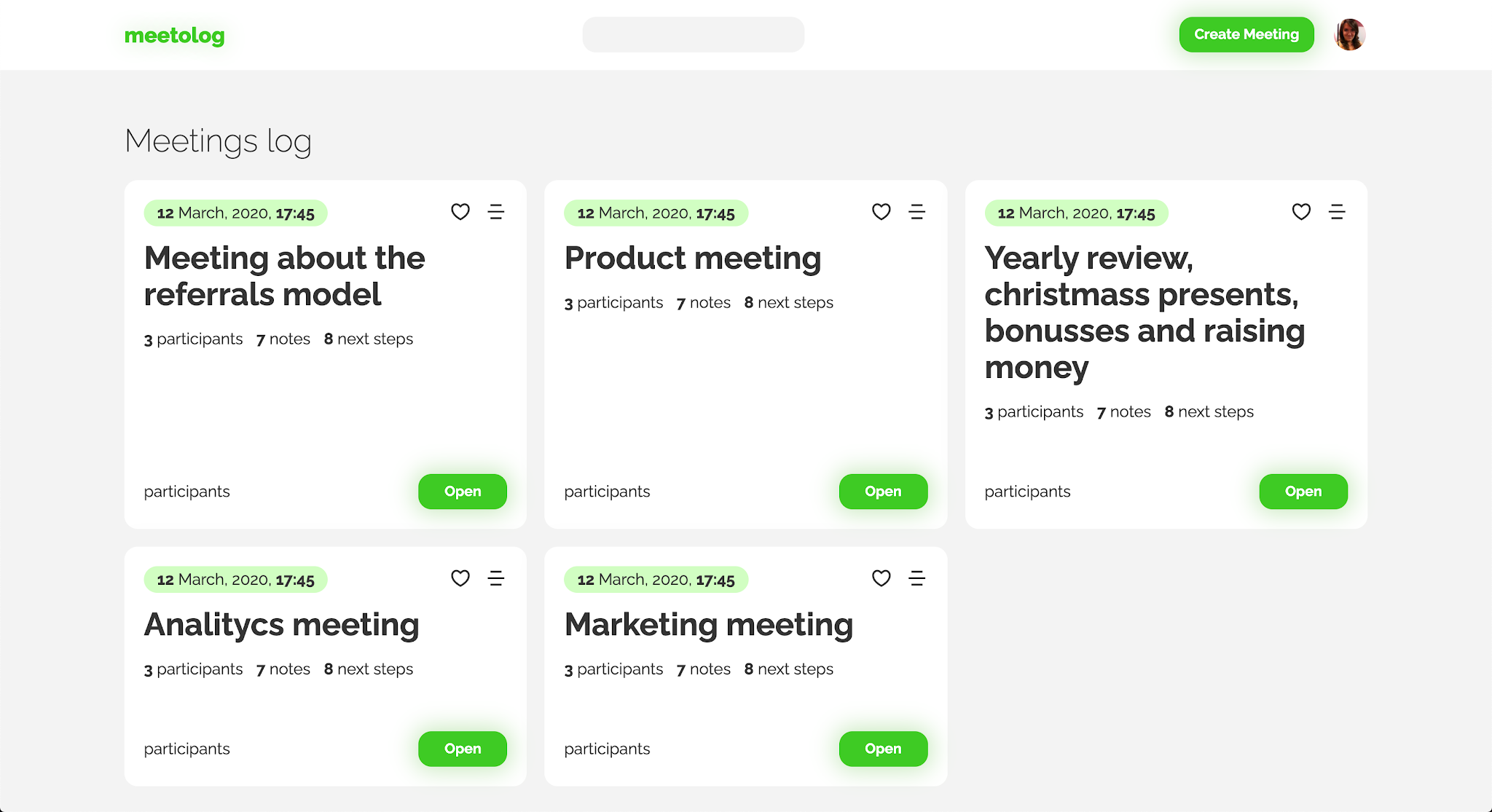 This is where all of the meeting logs are going to be listed. It's the entry point of a logged in user.
Currently it's completely static. It doesn't do anything. It's how I usually build things. I need to have them clickable in the browser and slowly, mindfully to add interactive functionality to the UI. I firstly mock the backend and then, once the server logic is ready, integrate it with the real API.
I also have the meeting screen designed, but still haven't stared developing it. I need some more time to think through it, before I put any code in the editor.
That's it for now.
From now on I'll be doing my "building in public" posts in a much shorter format, just sharing the most interesting bits of the process. As I said, I'm doing this mostly for me and my egoistic reasons, but still, It would be great if I inspire you to start creating things today, now. It's definitely a worthwhile experience. And who knows, maybe someday it's going to pay off. :)
building in public meetolog